Collect, touch, and explore the outdoors with the new Pokémon Outdoors Happy Meals from McDonalds Japan

From now until the middle of July, McDonald's restaurants across Japan will be running a "Pokémon Outdoors" promotion, selling a range of new "Pokémon Outdoors Happy Meals", with a total of eight collectable toys featuring Pikachu and other Pokémon. These Happy Meals range in price from 470~500 Yen ($3.48~$3.71 USD) each.

McDonald's Japan says the toys from these Happy Meals are "engineered to allow children to play and live in a unique, individualistic way," and can be played with indoors and outdoors. 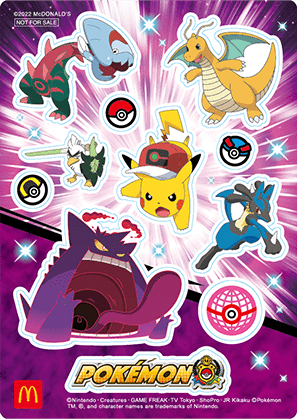 Each Happy Meal purchased over the week of June 17th-23rd will come with a random toy from an initial set of four. During the week of June 24th-30th, a separate set of four toys will be in circulation. After these initial two weeks, while the promotion is still ongoing in July, all toys from both sets will be available, while stock lasts. A "Pokémon Glittery Sticker Sheet" will also be included with purchase of the Pokémon Outdoors Happy Meal over the first weekend of the promotion, June 18th and 19th.


McDonalds Japan said:
A grand meeting of Pikachu, Dragonite, Gigantamax Gengar, and other Pokemon! You can have fun sticking them wherever you'd like, even onto letters to your friends and others.
Click to expand...

The toys available from June 17th to June 23rd include:

The toys available from June 24th to June 30th include:

System Error Jun 18, 2022
Man imagine going to McDonalds in Japan and getting a McChar Aznable Burger and experiencing AR with your phone while also getting McPokemon-related toys and collectables.

What a time to be alive (and a fan of McDonalds) in Japan.
Reactions: takoyaki
Join the discussion on the Forum (Requires registration)
The Original Pokémon Wiki
45,000+ pages
over 3.5 million edits
Browse now
Community